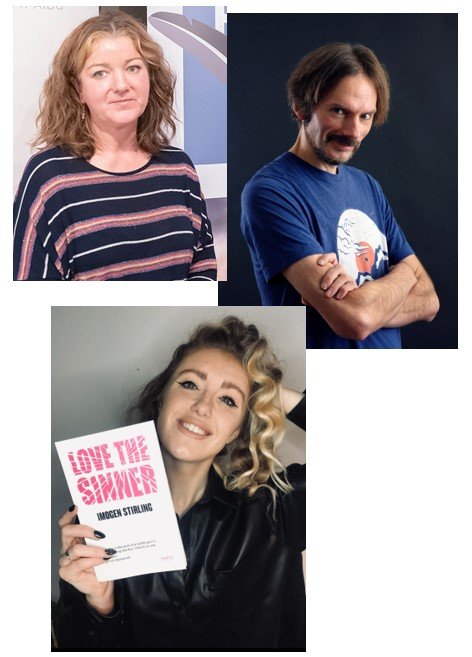 2nd of June at 7pm. A night of poetry readings with a focus not just on the work of the poets themselves, but the poems and ideas that influenced them. Hear three of Scotland's finely-tuned wordsmiths reading from their new collections and also introducing us to the poems they've found along the way. These new collections will be showcased with signed copies for sale on the night-

Imogen Stirling
Performance poet Imogen Stirling has performed her work extensively around the UK and Europe, with partners including Sofar Sounds, BBC Scotland, Latitude Festival, Lindisfarne Festival, Neu! Reekie! and Aye! Write. She can currently be seen on Sky Arts' BAFTA-winning show Life & Rhymes where she performed alongside Benjamin Zephaniah and Hollie McNish. Imogen was the inaugural Writer-in-Residence for Paisley Book Festival 2021 and is currently leading Wigtown Book Festival's youth programme. She was recently awarded ‘Artist of the Year 2021’ (Scottish Emerging Theatre Awards/National Theatre of Scotland). Her new collection Love The Sinner, is a modern retelling of the seven deadly sins.
‘the work of a lyrical genius’ BENJAMIN ZEPHANIAH

Mhairi Owens
Mhairi Owens is a recent winner of the Rhina Espaillat Poetry Award and Wigtown Poetry Prize. She lives in Pittenweem, Fife, where she works for a community addictions service as well as The Scottish Fisheries Museum. She writes in both English and Scots, and has appeared in a wild variety of places. Nine Notes on Slippage is the first full collection of her writing and has already won the Straid Collection Award.

Ash Dickinson
Ash Dickinson has been full-time as a poet since 2008. He is a multiple slam champion, including Edinburgh, Cheltenham, the Museum of Scotland and BBC Radio. He has performed in Australia, Canada, USA, Spain, Jordan, the Czech Republic and Germany, and headlined shows and festivals throughout the UK. Ash is in great demand to run writing workshops in schools, galleries, museums, prisons and with writing groups. His debut collection, Slinky Espadrilles was the very first title published by Burning Eye Books. His second major collection, Strange Keys, came out in 2016 and a collection for younger years, Show Cats In Transit, followed in 2019.
“Impressive wordplay” – The Times
“Clever And Funny” – The Scotsman
“Brilliantly surreal invention…fabulous poems” – Edinburgh Evening News
www.ashdickinson.com

Tickets £5 in advance, £6 on the door. Show will last around 90 minutes with intervals.